H.E. Mr. KIM Tae-jin, Ambassador of the Republic of Korea

Abstract: Among the first students of Korean Studies appears the name of Jaroslava Bičišťová, who authored two publications. One is a collection of Korean fairy tales, folk stories, idioms and riddles, bearing the title of Ze země jitřní svěžesti (From The Land of Morning Calm, 1963). The other one is a translation of Kang Hyosun’s 강효순 novel Dvojitá duha (쌍 무지개/The Double Rainbow, 1964), which presents only the third Korean novel translated and published in Czech. Nevertheless these considerable achievements, her biographical entry in the National Library consists only of the date of her death, whereas Dějiny koreanistiky (The History of Korean Studies, Pucek 2015) cites the year of her birth without mentioning the fact she died. In this presentation, a collection of different archive materials, personal memories and information from other sources will be introduced to enlighten the nearly forgotten pioneer of Korean-to-Czech literary translation.

Abstract: This presentation is based on my published article on the case of young Vietnamese Korean media audiences in the Czech Republic.[1] Backed by in-depth interviews with Vietnamese young adults in the Czech Republic who consume Korean media products on a regular basis, this study investigates how their diasporic contexts are reflected in the consumption of Korean media products. Excluded from the small media markets both in the Czech Republic and Vietnam, the migrant audiences actively consume Korean media products by using various media platforms available online. Previously, many studies on the transnational media consumption have delved into the cultural proximity between the origin of media products and the audiences. This study focuses specifically on the diasporic identity of the Vietnamese audiences in reaching transnational cultural products. While participants quickly spotted cultural similarity between Vietnamese and Korean cultures as the reason for their preferences, the in-depth analysis further revealed that cultural proximity was particularly identified (a) when they devised a concept of the Asian family from the dialectic relationship among their family experiences, the represented family culture in Korean media, and the observed Czech family culture; (b) when they found their diasporic identity in the image of hardworking immigrants; and (c) when they highlighted their cultural tastes and valued their human capital in contrast to those of Czech people and other kinds of Vietnamese migrants. This study demonstrates how cultural proximity is reflexively defined in a dynamic among the daily contexts of the Czech Republic, the diasporic Vietnamese community, and the transnational media originating in Korea. [1] https://www.tandfonline.com/doi/abs/10.1080/07256868.2020.1779199

Abstract: The beginning of Korean language teaching in Czech Republic is connected with Korean archeologist doctor Han Hŭngsu, who was the first Korean language lecturer in the School of living oriental languages founded by the Oriental Institute in Prague. Soon after reopening of the Charles University in Prague the Korean studies were founded in 1950 on a later Far East department led by prof. Jaroslav Průšek. The head of the Korean section was prof. Alois Pultr, who developed the first teaching material for Korean language together with dr. Han. During this early times due to technical difficulties the teaching materials in Korean were either handwritten or had to be transcribed into Latin alphabet such as for example the first

Abstract: Development of early modern history of Korea is tightly connected with foreign countries. Not only the Japanese, but Chinese, Russian and American influence played a great role in the formation of Korean national identity and later, the Korean states. This historical narrative, however, went through modifications according to the ideological or political needs in both North and South Korea, beginning in the 1950s, when all the Korean history was being rewritten and it reflected in the education of national history for the first time after the liberation.

As a part of my wider research on the impact of Great Powers on the events of Korean early modern history in high school history textbooks, I will present a case study on a single North Korean textbook from 1952 (Chosŏn inmin haebang t’ujaengsa (kyojae). DPRK: Naegak chiksok chungang chidokanbu hakkyo) and for comparison a single South Korean textbook from 1964, which was however written in 1955 and published for the first time in 1957 (Yŏksa kyoyuk yŏn’guhoe. Kodŭngguksa, chŏnhangnyŏnyong. Sŏul: Kyousa, 1964). I will qualitatively and quantitatively analyse the contents concerning the period between 1876 and 1945, with focus on the foreign influence on the main events of that time. It will allow an insight into historiographical discourse aimed at the next generations during the 1950s, before the implementation of self-reliance policies in both countries, which greatly reinterpreted the national history.

Ch’ilgǒjiak 七去之惡 (seven reasons for divorcing wife) is probably best known from the Chosǒn period, although there are many evidences that this system was widely used throughout the whole period of Koryǒ. For the first time, it appears in the Kongzi Jiayu 孔子家語 (Family sayings of Confucius) from the time of the Han dynasty. However, in case of Koryǒ, it seems that ch’ilgǒjiak was adopted from the Tanglü shuyi 唐律疏議 (Law System and Annotation of Tang Dynasty) which the Koryǒ law was mainly based on. In this presentation I would like to show how the system was perceived by the Koryǒ society which was not only Confucianism-oriented. I will analyse real cases recorded in the Koryŏsa 高麗史 (History of Koryŏ) and the Koryŏsa chŏryo 高麗史節要 (Essential of Koryŏ History) as well as some cases from other literary works.

The main focus of the presentation will be on the application of ch’ilgǒjiak in the Koryǒ society. I will use examples mostly from the chronicles. The most recorded one of the seven reasons was adultery. Nevertheless, in this case the divorce was not the only punishment for women, in fact there was a large scale of punishments. Another frequent reason, according to the chronicles, was wife’s jealousy: wives were usually not only jealous, in many cases they were also violent and fierce. On the other hand, there is not even a single record concerning not having a son due to which a wife could be forced to get divorced, and it is hard to find a record about a banished wife because of having a serious disease either.

In this presentation I will try to ascertain the extent to which the system of ch’ilgǒjiak was applied and hence how important role wives in family could have occupied. To show the differences in the development of the society, I will also present a few examples from the very beginning of the Chosǒn dynasty. Finally, I will try to answer following questions: how did Koryǒ differ from the original Tang law in application of ch’ilgǒjiak? How could it impact women-wives?

Abstract: Even in the present day, fire disasters can seriously disrupt the functioning of a community or society and result, among others, in significant human, economic, cultural and

environmental damage. It is thus both neccessary and desirable to be able to effectively react to such events, if possible prevent them from happening, or at least to reduce its potencial negative consequences.

Before modern firefighting system was introduced and properly implemented in Korea, fires were one of the most frequent and dramatic natural disasters Chosŏn government and society had to deal with, since it could spread very easily and was hard to stop without adequate firefighting equipment, technique and proper emergency management. The word disaster literally means „bad star“. Old Korean society had indeed perceived the occurence of natural disasters as an ominous or warning sign from the heavens and it was none other than the king who was often deemed responsible for such unfortunate events. Various disaster warding rituals seem to had been a common practise as well. It was nevertheless necessary to take a more realistic approach towards this issue and so the presumably first government-organized firefighting system had slowly started to develop in the first decades of Chosŏn kingdom.

Through this presentation I would like to intruduce the topic of my current research where I examine the perception of fire occurences, as well as the historical events and circumstances that led to the establishment of the first government-organized firefighting institution in the history of Korea (Kŭmhwadogam, 禁火都監) in 1426, its structure, identify which government departments were engaged in matters related to fire disaster prevention and response, and observe ho 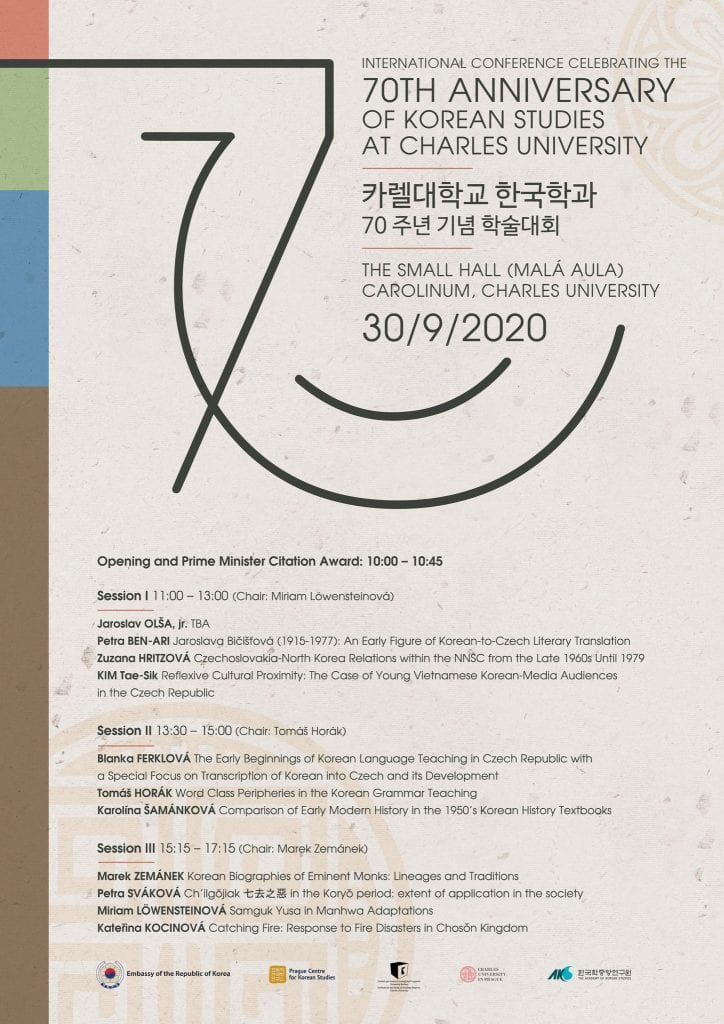